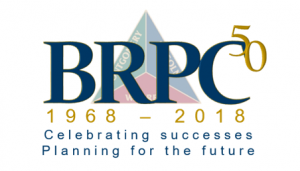 Boonslick Regional Planning Commission celebrated its 50th anniversary with an open house on Wednesday, May 23, 2018.  Information about the organization’s start and pictures of past anniversaries, regional partners, and staff members were displayed.  The many projects and programs with which BRPC has been involved in over the years were also featured.  Those attending enjoyed the opportunity to see old friends and reminisce.  A sincere thank you to our membership and partners for your support in Boonslick Regional Planning Commission’s mission to improve the quality of life in Lincoln, Montgomery and Warren counties.  BRPC will continue celebrating this milestone at its annual meeting in December.

The Boonslick Regional Planning Commission general membership held its annual meeting on Wednesday, December 5, 2018 at the Knights of Columbus Hall in Montgomery City. The evening was a look back at some of the many projects which BRPC has been instrumental in bringing to the region.

Former Montgomery County Presiding Commissioner Charles Korman, who also served as BRPC Chairman at one time, was the guest speaker for the event.  He shared his opinion that Boonslick Regional Planning Commission is a great asset to local elected officials as they make efforts to serve their communities.

State Representatives Bart Korman and Bryan Spencer read resolutions from the Missouri House and  Senate and presented these to current BRPC Chairman Hubert Kluesner. The resolutions included information about the organization such as its establishment as an Economic Development District, membership in the   National Association of Development Organizations, and that BRPC has assisted in over $260 million of grant-funded projects in the region.